Despite the government’s effort to combat sexual abuse and exploitation against children, these crimes remain rampant.

The Department of Social Welfare and Development (DSWD) fully supports the celebration of the National Awareness Week for the Prevention of Child Sexual Abuse and Exploitation on February 8-14, 2021, through the activities of the Council for the Welfare of Children (CWC) and its Sub-Committee on Sexual Abuse and Commercial Sexual Exploitation of Children (SC-SACSEC). 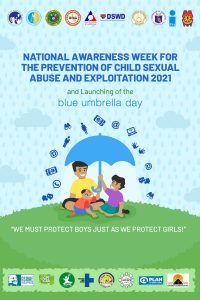 Proclamation No. 731 s. 1996, declared the second week of February every year as “National Awareness Week for the Prevention of Child Sexual Abuse and Exploitation.”

This year’s celebration with the theme, “We must Protect Boys Just as we Protect Girls,” focuses on the launching of the Blue Umbrella Day (BUD). This international movement aims at protecting boys that emerged out of a cross-country study that included India, Guyana, Paraguay, and the Philippines.

The celebration, which started on February 8, 2021, featured an online film screening of the movie John Denver Trending. An internationally acclaimed Filipino movie, it mirrors the pressing issues of cyberbullying, mental health among children and adolescents, and the role of the community in their development. The members of SC-SACSEC viewed the film.

“Children are God’s heritage, and we are answerable to Him for our management of them,” said Regional Director Rebecca P. Geamala of DSWD-7.

As part of its support endeavor, DSWD-7 will hold a BUD on Monday, February 15, 2021, where every division or unit is encouraged to bring a blue umbrella and open it for the whole day. ###